Everyone knows some names of coast in Spain and the Costa Brava to the French border and the Costa Vasca Spanish Basque country but some smaller ribs to visit, we'll do here around the coast of Cadaques near Rosas Barcelona and Huelva in the Portuguese border. Then taken by the Basque Country to San Sebastian to the Portuguese border North this time marking the end of Galicia.

Spanish coasts in the Mediterranean until the end of Andalusia 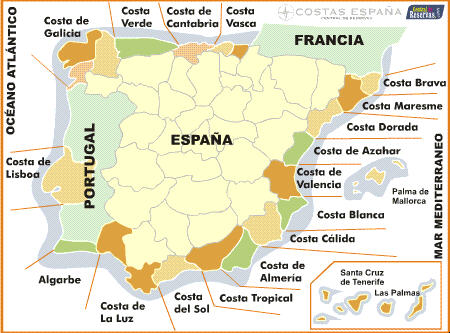 Costa Brava alternates between coves, fishing villages but also large tower made for mass tourism, Rosas is a good base for the north you have small villages and Rosas has all the necessary accomodations in a beautiful bay.

However, prices are French so pay attention to CB.

Surrounding Barcelona Costa Maresme is known for its beautiful beaches but they are often taken over as often in Spain, however, the walks are nice and the water is warm from July to September.

Even critical price for the Costa Brava especially in Barcelona and its beautiful beaches.

This coast getting for your money, whatever your aspirations:

Tarragona with its Roman ruins is a lovely city.

Want to amusement park for children and adults while Port Aventura is for you!

The magnificent Strait Ebro remained by his impossible position to invest for men, you will discover a corner of invigorating and refreshing kind during the hot summer.

The Costa de Azahar continues the southern route in Spain to the community of Valencia, here we alternate the beautiful yet little invested by tourists (except local) beaches, tours here are rare but the beaches are often urban.

The coast of Valencia has one of the longest and best beaches in the Mediterranean even in the city center of Valencia, the region is fabulous and everyone in the area of Denia and its wild beaches through Cullera and nudist beaches el Saler.

If you like the concrete you will be served (still not like the Costa del Sol), Altéa, Benidorm and Alicante and finally san juan city beaches are very beautiful but really, what a pity this mess of modern building sniff ...

Not afraid? Then continue on the south of Alicante or there are large and small wild beaches that are under assault rightly even weekends off season.

The province of Murcia is the last barrier before the famous Andalusia, much less concrete and known apart from the fact that mar menor strip of land in Miami!

The region is hot, we advise!

Before the hive Coast Andalusia, one last little piece of paradise with the Costa de Almeria and famous beyond the borders Spaniards who is a former volcanic park nature park: Absolutely superb!

The rest of the Costa de Almeria is a result of the Costa Tropical resort - Old Town etc ... Not well thought made in the development plan was done in a hurry (just kidding there has ever had!)

Most of this coast is formed by small cliffs enamel soon as there is a few beaches with resorts, not bad but not the summer, what is beautiful is the scenic route along the coast and caves of Nerja

Concrete nothing concrete yet concrete, some beaches are still nice as Estepona which in addition is really inhabited by locals!

However if you're not afraid of the world Torremolinos has a superb range of enamelled palm promenade really cool sea.

The border with Costa del Sol is seen on the buildings near net stop and there was less and less to be completely wild from Tarifa, beaches océaniquessont to fall and the views are beautiful.

The Costa de la Luz is lucky to have the sun making it a good destination before and after season.

The North Atlantic coast of Spain

The waterfront is beautiful whether small little-known along the coast or the beautiful city of San Sebastian in Spanish or san sebastian counts among the most beautiful beaches in the world in Basque country corners.

Following the Atlantic coast is nestled between mountains and beautiful Atlantic beaches, the water is still bearable but watch the waves :)

If you want I translated for you: the green coast, it rains very often, however the beaches are very nice on this costa verde but some difficult to access.

Why this is not the costa galicia who inherited the name of Costa Verde, I can not tell you, though it also rains often seen fantastic beaches cliffs why this place is not in the south, what a pity!